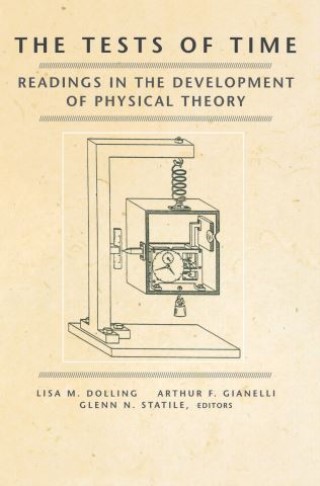 The Tests of Time

Readings in the Development of Physical Theory

The development of physical theory is one of our greatest intellectual achievements. Its products--the currently prevailing theories of physics, astronomy, and cosmology--have proved themselves to possess intrinsic beauty and to have enormous explanatory and predictive power. This anthology of primary readings chronicles the birth and maturation of five such theories (the heliocentric theory, the electromagnetic field theory, special and general relativity, quantum theory, and the big bang theory) in the words of the scientists who brought them to life. It is the first historical account that captures the rich substance of these theories, each of which represents a fascinating story of the interplay of evidence and insight--and of dialogue among great minds.

Readers sit in with Copernicus, Kepler, and Galileo as they overturn the geocentric universe; observe the genius of Faraday and Maxwell as they "discover" the electromagnetic field; look over Einstein's shoulder as he works out the details of relativity; listen in as Einstein and Bohr argue for the soul of quantum mechanics in the Completeness Debate; and watch as Hubble and others reveal the history of the universe.

The editors' approach highlights the moments of discovery that rise from scientific creativity, and the presentation humanizes the scientific process, revealing the extent to which great scientists were the first to consider the philosophical implications of their work. But, most significantly, the editors offer this as their central thesis: although each was ushered in by a revolution, and each contains counterintuitive elements that delayed its acceptance, these five theories exhibit a continuous rational development that has led them to a permanent place in the worldview of science.

Accessible to the general reader yet sufficiently substantive that working scientists will find value in it, The Tests of Time offers an intimate look into how physical theory has been developed, by the brilliant people who have developed it.