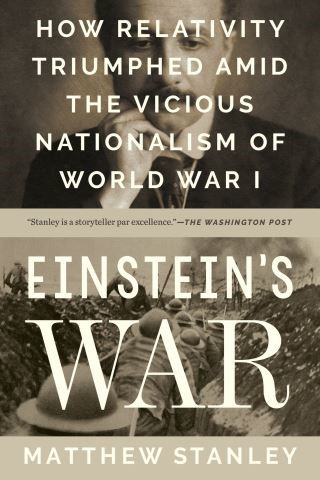 How Relativity Triumphed Amid the Vicious Nationalism of World War I

The birth of a world-changing idea in the middle of a bloodbath
Einstein’s War is a riveting exploration of both the beauty of scientific creativity and enduring horrors of human nature. These two great forces battle in a story that culminates with a victory now a century old, the mind-bending theory of general relativity.

Few recognize how the Great War, the industrialized slaughter that bled Europe from 1914 to 1918, shaped Einstein’s life and work. While Einstein never held a rifle, he formulated general relativity blockaded in Berlin, literally starving. He lost fifty pounds in three months, unable to communicate with his most important colleagues. Some of those colleagues fought against rabid nationalism; others were busy inventing chemical warfare—being a scientist trapped you in the power plays of empire. Meanwhile, Einstein struggled to craft relativity and persuade the world that it was correct. This was, after all, the first complete revision of our conception of the universe since Isaac Newton, and its victory was far from sure.

Scientists seeking to confirm Einstein’s ideas were arrested as spies. Technical journals were banned as enemy propaganda. Colleagues died in the trenches. Einstein was separated from his most crucial ally by barbed wire and U-boats. This ally was the Quaker astronomer and Cambridge don A. S. Eddington, who would go on to convince the world of the truth of relativity and the greatness of Einstein.

In May of 1919, when Europe was still in chaos from the war, Eddington led a globe-spanning expedition to catch a fleeting solar eclipse for a rare opportunity to confirm Einstein’s bold prediction that light has weight. It was the result of this expedition—the proof of relativity, as many saw it—that put Einstein on front pages around the world. Matthew Stanley’s epic tale is a celebration of how bigotry and nationalism can be defeated and of what science can offer when they are.

Matthew Stanley: Matthew Stanley is a professor of the history of science at New York University's Gallatin School of Individualized Study. He holds degrees in history, astronomy, physics, and religion. He has published two academic books and has written for Physics Today, Physics World, and the Los Angeles Review of Books. He explains physics to non-scientists in his podcast What the If?!? and has appeared in documentaries on the History Channel, BBC, and NPR. Einstein's War is his first trade book.